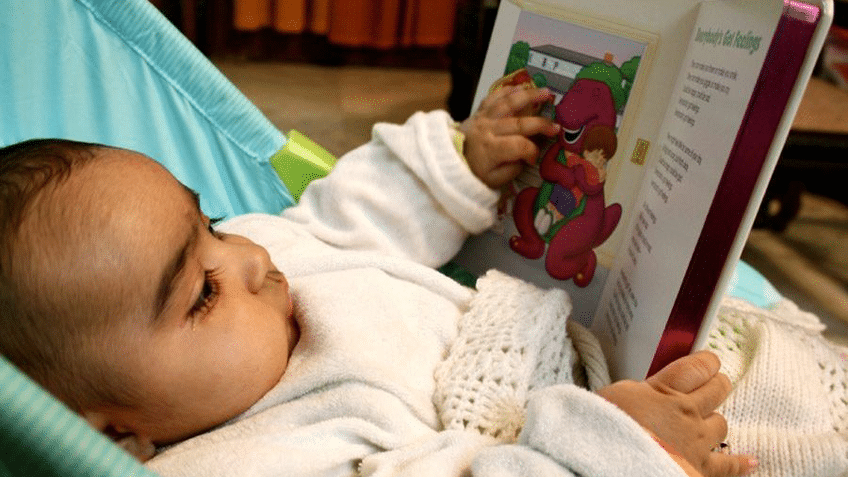 Psst…have I created a reading monster?

Well I would say the moment you know there is a baby on its way!
For starters you should start talking to your baby as soon as you find out you have company. Yes! It’s true. I know it might seem silly to talk to your tummy; well it did to me, so initially I did it when I was alone. Mostly in the shower and while driving to work. Even then I found myself mostly whispering to my tummy lest someone heard me! Then as time went by and my bump started showing it became easier and , I remember, it must have been around week 20 when I picked up a book and began reading it aloud. The first book I read to Viraaj, the foetus, was The Puffin Book of Classic Indian Tales – Meera Uberoi.

I was holding the book with one hand and gently caressing my tummy with the other. My husband walked in and was considerably amused; when I told him that I was reading to the baby he loved the idea at once and since that night until the end of our pregnancy we both took turns and read to Viraaj every night at bedtime.

When Viraaj arrived the first few days were crazy. Forget books it was hard to even find my bearings. At around two months he and I had developed a symbiotic relationship. I knew he needed to be fed, cleaned, rocked, fed, cleaned, rocked, in loop, all through the day AND night! And I performed these duties to the best of my abilities (in fact I surprised myself!).

Perhaps seeing my consistency and dedication he decided to give me some bonus sleep time during the day and night. We both were getting along fine. Then one day I decided to return to our initial bedtime routine and brought a book to bed. The first book that I read to Viraaj, the baby, was Meow – Begin Smart Books

I read it aloud and since it was a board book I let him hold it while I went to get something from the kitchen. When I returned I saw my book worm completely absorbed in the book, literally, and the book was copiously slobbered. It was indeed a fulfilling experience to wipe it clean again – wonderful production value. Full marks to the publisher.

We followed the routine for a while and when Viraaj began sitting on his bouncy independently for longer durations, I gave him his second book: Barney: My First Sing Along Book

Again a board book with thick water proof easy to turn pages.

He would manage holding it for a few seconds and I would almost always find it on the floor when I returned. So I decided to go book shopping…wait actually I didn’t…I’ll let you in on a little secret there are a few perks of working with a children’s publishing house, so I made a few calls and a wonder package arrived the next day – cloth books, chewable books, easy to hold board books  – such joy!

: A feather weight cloth book with delightful illustrations, touch and feel patches, and a surprise squeaky in the end.

It was an instant success. I would often find Viraaj staring into space and chewing on it. Not only was it a colourful book that squeaked it doubled up as a chewable washcloth and helped us cope with the evils of teething.

The other books we read from at bedtime between 4-7 months:

And ‘Meow’ always remained our most favourite. (By now the cover began peeling and I gave up on trying to stop him from chewing the foam handle – I had stopped buying teething rings long ago!)

At around 8 months, I began training him to nap while I read. I would not take him in my arms and not feed him. We both would just lay in bed and I would read one book after another and soon find him asleep next to me. This seemed to work well during the day and at around 10 months I wanted to stop his feed at bedtime. I wanted him to eat his dinner and then fall asleep without a feed. I didn’t mind feeding him in the middle of the night, if he woke up, but I wanted the ‘feed to sleep addiction’ to stop! So I tried to adapt the reading routine at night too and guess what? Voila! It worked. (It would take an hour of non stop reading for him to fall asleep. You have to summon all the patience in the world to be able to do this. I would be lying if I didn’t get tempted to chuck the whole rigmarole and feed him…)

He did wake up every four hours for a feed and I happily relented.

The books that we were reading around that time:

At around 1 year, I began reading short story books. ‘Clifford the Big Red Dog Phonics Fun Pack: Reading Program Pack 1’ worked beautifully for us. The books are thin and easy to handle, they are not board books so it’s a good way to transition to paper books. The stories are short, of course created for the phonics programme. Though we used the pack for moving on from board and touch & feel books, we plan to get back to them when Viraaj is learning how to read.

The other books we read around then and still read currently:

He discovered a wonderful world outside and was pretty curious about frozen yogurt after reading ‘I shop with My Daddy’. He also learnt how not to make a fuss in public places, especially for treats. He began noticing pigs (they are found in abundance in the part of the world I live in) and that’s when I introduced story of The Three Little Pigs during meal time. He also learnt what a tent, thanks to ‘Guss gets scared’, and I often found him sitting under his high chair – he called it his tent.

The point is that Viraaj started making a connection with things inside his books to things outside in his world. His curiosity had reached an altogether new level by now and his general knowledge was super. (I am such a show-off!)

It was around that time that I introduced him to the fabulous word of Dr Seuss books. We started with Hop on Pop (a favourite till date). We moved on to The Cat in The Hat and then I realised that he has started listening and stopped fidgeting during bed time so I introduced him to longer reads by the author – The Cat in The Hat Comes Back, Green Eggs and Ham, Happy Birthday To You, Oh The Places You’ll Go…

At 15-18 months he was listening, understand and responding well. It was also the time for potty training. I would make him sit on the potty seat, first thing in the morning and sit with him on a bath stool and read all his favourite books. Soon he began sitting independently and when there wasn’t a book handy I gave him a magazine, a glossy newspaper, a pamphlet…anything! He just needed something to look at while doing the job.

At around 18-20 months we had graduated to story books. This is also the time he began howling one night during the story of ‘Goldilocks and The Three Bears’ and asked me to stop reading it. I still don’t know what he didn’t like about the story but we are not allowed to read it till date. All he said was, “It makes me sad”

Some of his other favourite books around this time were:

After his second birthday he was absolutely fascinated by cakes and birthday parties and he simply fell in love with (in an obsessive way!)

I also bought a couple of books on love, which we devoured on most nights

At two and a half years we have read the complete ‘Amma Tell Me Series’ by Bhakti Mathur.

Presently the books on out bedside are:

I don’t know if this is the best way to bring up a child. Every parent has his/her strategies but I most definitely know that my son will never be alone for he’ll always have a book to give him company. And when he uses words like ‘enormous’, ‘dangerous’, ‘delaying’, ‘Timbuktu’, ‘dismantle’, my husband and I exchange a quiet smile proudly. Yes we have made many mistakes as parents but we are absolutely sure we have done one thing right and we really do hope we manage sticking to it.

Word of caution – if you follow this routine it is possible that:

3 thoughts on “When is the right time to begin reading to your child?”