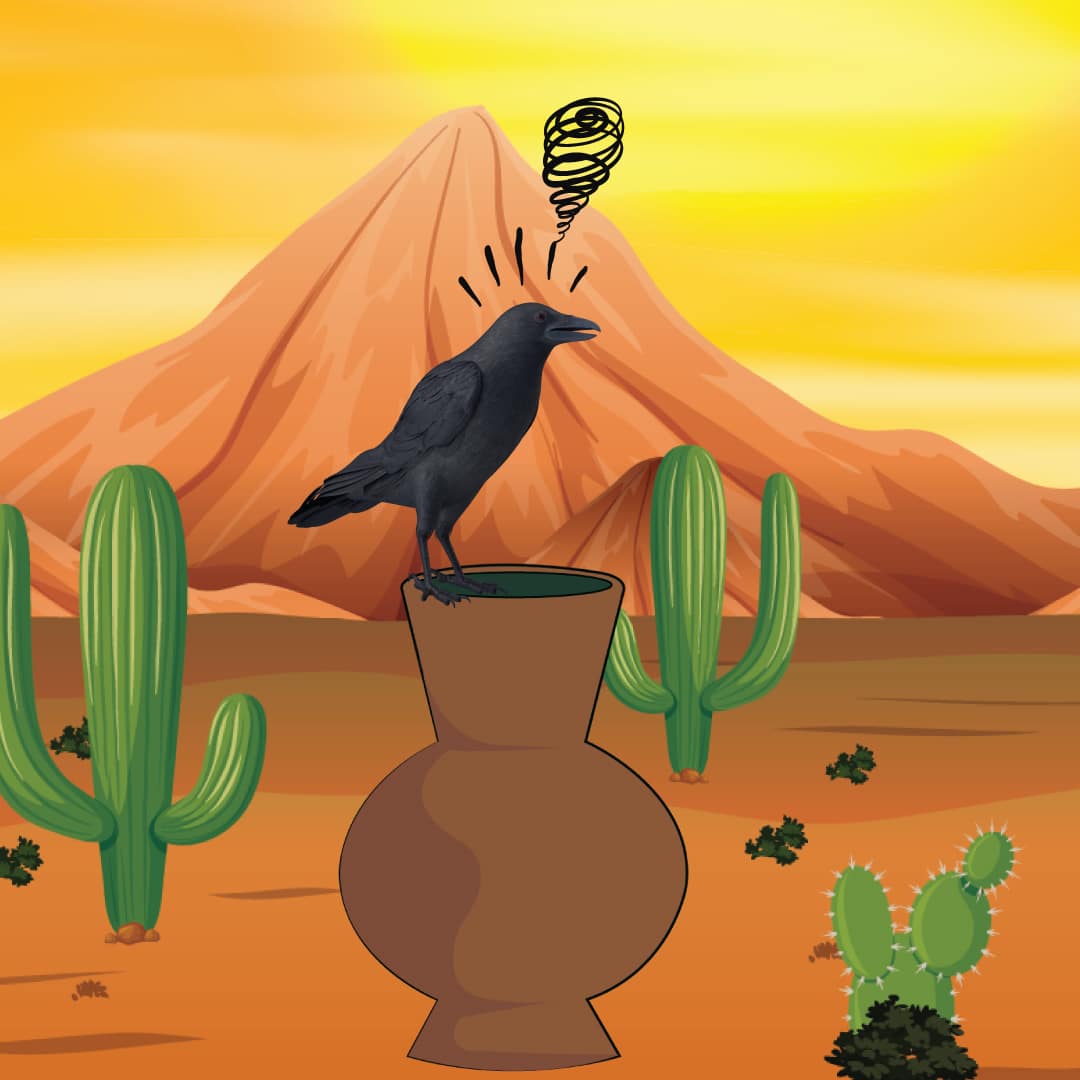 Listen to the Story: The Thirsty Crow

Listen to the story of ‘The Thirsty Crow’, a popular Aesop’s fable: On a hot summer afternoon, the crow was tired after taking a long flight. It was thirsty and was looking for some water. The crow came across a pitcher, but the water in the pitcher was so low that the crow could not reach it. The crow had to think of something to access the water. This story is about the crow’s ability to remain calm, think and come up with a solution to quench its thirst.

So the protagonist of the story, the crow, was quite clever. In fact, he was a critical thinker and problem solver.

So many times we too are stuck in difficult situations. What do we do? Do we give up or do we look for solutions? What would you do if you were in the crow’s place? Do you have a better solution? Please share your ideas in the comment box below.

Did you know bird watching or birding means going outside to enjoy watching birds. It’s a popular hobby.

Someone who does this may be called a bird watcher, but more often a twitcher or birder.

People who study birds as a profession are called ornithologists learn this and much much more in our Stories and Life Skills Development program.

Access a detailed lesson plan that has fun discussions, experiments, games, and much more.

Build life skills and more with our lesson plans created by experts.

On a hot summer afternoon a crow who was flying about looking for water.  The crow had been flying since morning and was now tired and thirsty. It looked everywhere for water, but couldn’t find any.

Exhausted, the crow went and perched itself on the branch of a tree. And while it sat there the crow began to feel a little dizzy. With its head spinning, he thought he had started hallucinating. But then, it did see something.

‘Caw,Caw,Caw.’ It cawed in wonderment.

It was a pitcher. The crow peered and saw its own reflection. Ah, finally the crow had found some water. The crow got really excited.

‘Caw,Caw.’ It called happily and then swooped down to have some water. The moment the crow reached down, it sat next to the pitcher and put its beak inside to reach for the water. The crow realised that the water was deep down and the it couldn’t quite reach the water.

It was a big, heavy pitcher. The crow tried to peck at it with its beak, but the pitcher was big and heavy and it did not budge.

The crow was thirsty. Its throat was parched. The crow was confused and the sun was scorching. It was getting very hot. The crow did not want to give up.

It looked here and there and everywhere. It just did not know how to drink the water. It struggled and struggled, it pecked and pecked on the pot, hoping for it to break. But the pot was strong.

The crow wanted to give up, but it knew that if he keeps himself calm, he may be able to come up with another solution. He took a few deep breaths, calmed itself down. He then looked around with a relaxed mind. He then saw some pebbles lying around. These pebbles had been there all along but he hadn’t noticed them all this while. He was so focused on the idea of breaking the pitcher, he did not think of any other alternative.

Looking at the pebbles gave him an idea. An idea with which the crow could reach the water.

The crow was determined to make this work. So it went over again, picked up another pebble and brought it back and dropped it again – ploop. The water moved again. It rippled a little bit.

So it went over again to the pile of pebbles. Picked up another one in its beak and brought it back – ploop and another and another. It was tiring for the crow but the crow knew that it would work.

After throwing in lots of pebbles in the pitcher the water level had risen. Yet, it was not enough for the crow to reach the water. So the crow started the exercise again. It went and got more pebbles and put them in the pitcher.

Finally, the water rose to the top of the pitcher.  The crow was so excited! The crow then put its beak into the pitcher and took a big sip of water to quench its thirst.

‘Ah, caw.’ Tt heaved a sigh of relief. Its throat was not parched anymore.

And then the crow patted itself on its back for being so clever and flew off happily. ‘Caw, caw, caw, caw.’

1 thought on “The Thirsty Crow”