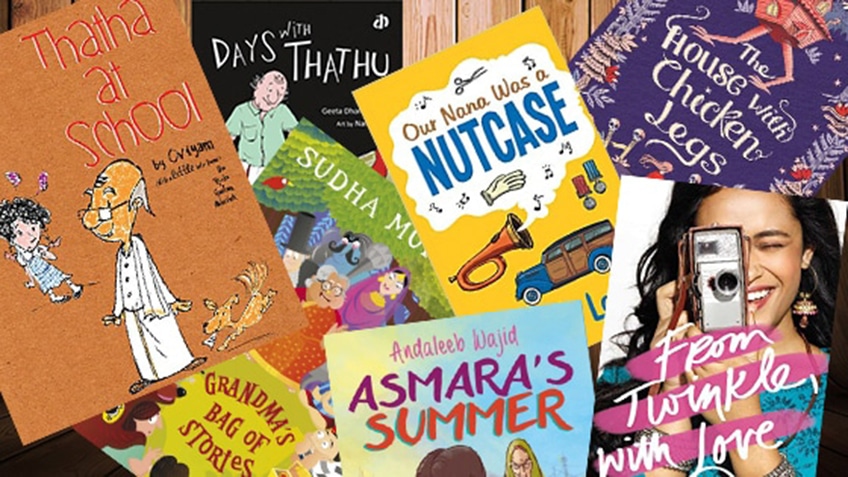 We’re celebrating the source of infinite and timeless stories, countless anecdotes of wisdom, immeasurable mounds of affection and encouragement, smugglers of all good things that are forbidden and proclaimers of the constant rant that their time was better than ours.

We are celebrating Grandparents.

How things unfold? The book takes us through Malar’s day with her grandpa, though bedtime, playtime, nap time, storytime.

Bookistaan says: It’s such a lyrical beginners’ picture book that will be loved by parents just as much as children. For a child the book is about the beautiful relationship between Malar and her grandfather, all the fun and mischief they manage, for an adult it’s all sorts of nostalgia. The illustrations are unique, mostly done in black and white, except a little burst of one color on every double spread.

How things unfold? It’s grandparent’s day at school and everyone’s grandparents are invited. While everyone is excited, Oviyam is dreading the day, she’s certain it’ll be the worst day ever and everyone will laugh at her.

Bookistaan says: Have you ever been embarrassed about your parents and grandparents? If yes, this book will definitely have your heart. It’s an immensely relatable book that shows love is bigger than anything else. The illustrations are hilariously detailed and add more dimension to the story.

How things unfold? Grandma’s collection of stories about the queen who discovered silk, the bear who ate really bad dessert, a princess who turned into an onion and many, many more.

Bookistaan says: Grandma’s stories are full of magic, absurdity, wonder, fantasy and larger-than-life characters, with just a touch of a lesson to them, that makes for the perfect stories to be passed-down.

Our Nana was a Nutcase

How things unfold? Gosling, Duckling and twins Dumpling and Dingaling have been raised by their nutty Nana, he is the only parent they have ever known and every day with him is a riot. Life at the Shadow House with Nana as commander in chief is never boring but then his memory starts lapsing and soon the ‘platoon’ must take charge and save him from their own parents.

Bookistaan says: There is never a dull page in this book about family love and growing up. Nana’s crazy antics and the children’s mischief will have you rolling in laughter. The book gives you a lot of characters to root for, a lot of characters that feel like family by the time the book ends. It’s also one of those books that I just did not want it to end.

The House with Chicken Legs

How things unfold? Marinka lives in a house that can move all over the world. What’s more? Her grandmother is Yaga, a guardian who guides the dead into the afterlife. She’s in training too and having a friend is just not part of her life. But when she breaks all the rules to make a friend, the consequences are devastating. Now her grandmother is missing, and she must find her.

Bookistaan says: Inspired by Russian folklore, the book has an enchanting fairy-tale-ish atmosphere to it. It has magic, fantasy and a house that moves and plays. I loved how it explores the burden of destiny and the loneliness that comes with it, it’s quite surprising in a book like this and that is not even the only thing. This book will surprise you to no end.

How things unfold? 17-year-old Asmara is confident, popular and a little bit of a diva. But behind her perfect life is a secret, one that even her best friends are unaware of, one that she thinks could be the end of her life. And now she has to live that secret. She has to live in Tannery Road – a conservative part of the city, a place she has avoided all her life – where her grandparents live.

Bookistaan says: Asmara’s life changes suddenly when she has to move to her grandparents’ home for the summer, something she had been avoiding for as long as she can remember.

It’s a fun, easy-breezy read about learning to embrace yourself and letting people surprise you, finding friends where you least expect and also coming to realize that people who love you will stand by you no matter what.

For Twinkle, with Love

How things unfold? A YA contemporary romance about Twinkle an Indian American who wants nothing more than to be a filmmaker and also visible at school. Her chance comes when fellow film geek Sahil Roy, approaches her with a chance to showcase her movie at the upcoming Summer Film Festival. Throw in a long-time crush, a secret admirer, an estranged best friend and you have a perfect teen novel.

Bookistaan says: An ambitious protagonist who also happens to be an opinionated feminist is just the kind we love. It’s another page-turner that you breeze through without realizing. And even though the Dadi in this book has a small role, she’s one of the most adorable parts of the book and will stay with you for long.

Bookistaan is a small town, recommendations based children’s bookstore that believes that a child’s imagination is a black canvas that can and should be painted all sorts of colours and the best way to do it is through books. We bring to Kanpur the best of Children’s literature from India and abroad, offering diverse, age-appropriate reads for your child’s every need.