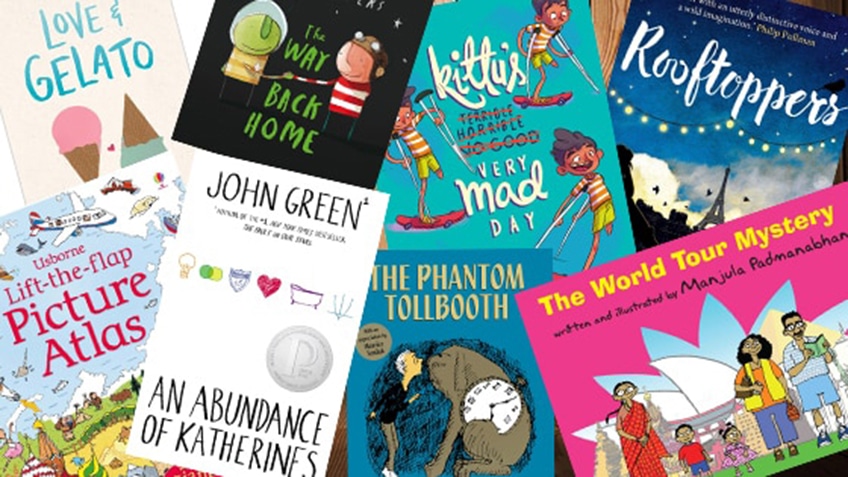 Books one could explore during school vacations.

It’s summer! School’s out! The best time of the year!

It’s the time perfect to explore, discover. time to learn new things, time to travel. And that is the theme for this month’s newsletter, books with travel or journeys.

Now here’s the thing about travel, when you are going into unknown space, it gives you a chance to reinvent yourself. Become a different you, meet strangers, strike random conversations. In that sense traveling isn’t just about discovering a new place, it’s about finding yourself. Maybe it’s the break from routine or the fact that no one knows you, but journeys have a way of helping you grow just like books, and that’s why I am combining my two most favorite things today, books and travel, in books about travel.

THE WORLD TOUR MYSTERY takes readers on a twelve stop trip to monuments, sites, and wonders of the world with a lively family of six. But that’s not all. There’s some detective work to be done. Gentle hints in the diary jottings of the travelers and helpful clues in the spectacular pictures invite readers on every double spread to guess where the family’s just been to and no, it’s not to the place on the previous double spread! The pictures not only capture the uniqueness of each man-made wonder but also draw readers to observe closely and think in a logical sequence.

Bookistaan says: This picture book takes us around the world, from the ruins of Machu-Pichu to the pyramids of Egypt. The gorgeously detailed pictures show scenes from the different destinations and the mystery is that the reader has to guess the place. It’s a beautiful book, peppered with amusing facts, does a good job of actually making the reader feel like a tourist because the illustrations are done from the POV of a tourist.

The Way Back Home

Bookistaan says: A young boy seeking adventure and making a friend in a strange land is such a simple story but add to it Oliver Jeffer’s hidden meanings and his signature expressive stick-legged characters and you have another glorious book.

Our wonderful planet is full of beautiful buildings, exotic animals and fabulous sights to see. To find out where in the world they are, explore the maps, and lift the flaps in this delightful atlas.

Bookistaan says: This is my favorite Atlas right now and I think a great way to get children interested in geography, also become informed citizens of the globe. It’s a lift the flap atlas of the world that makes exploring that much more fun. There’s a lot of learning. It exposes children to not just places around the globe but also flora, fauna, buildings, foods, sports, popularity and cultures.

Kittu is lost! The World’s Most Chaotic Family has left him behind at a dhaba on the highway in the middle of nowhere.

He is rescued by an ice-cream-wala and suddenly, Kittu’s terrible, horrible day turns mad! Who would have thought that this middle-of-nowhere place would have a skate park? The ice-cream-wala’s daughter Mad is mad about skateboarding and now Kittu wants to zoom around on a skateboard, too! But can a boy with one leg who walks on crutches learn to skateboard? Is Kittu mad to even try?

Bookistaan says: This diverse book has a protagonist with a disability, a fierce, loquacious, one-legged, ten-year-old who, while on a vacation with his crazy, big family, gets lost. It’s a delightfully mad tale about thinking on your feet (in this case foot) to find your way out of problems, with a little bit of seeming and making lots of friends along the way. I love that the book doesn’t make disability an awkward conversation, but delivers it as just another story about just another little boy. It’s a story with a lot of heart and I love how it has handled the fear of getting lost by giving us a fearless protagonist.

Hailed as “a classic. . . . humorous, full of warmth and real invention” (The New Yorker), this beloved story -first published more than fifty years ago- introduces readers to Milo and his adventures in the Lands Beyond.

For Milo, everything’s a bore. When a tollbooth mysteriously appears in his room, he drives through only because he’s got nothing better to do. But on the other side, things seem different. Milo visits the Island of Conclusions (you get there by jumping), learns about time from a ticking watchdog named Tock, and even embarks on a quest to rescue Rhyme and Reason! Somewhere along the way, Milo realizes something astonishing. Life is far from dull. In fact, it’s exciting beyond his wildest dreams. . .

Bookistaan says: A children’s classic full of metaphors and puns, with so much to read between the lines and such wisdom. There were so many sentences in this book that I read twice or thrice just to let it soak in. That’s the thing about the Phantom Tollbooth, there’s more than the surface meaning to most things, which is why it’s the kind of book you savor slowly.

The setting of the book is complex in the sense that it needs to be analyzed on a language level (what with so many puns and all!) but for me, it made the book so clever, fun (geek that I am) and gave the narration so much depth. It’s not the kind of book you can read just once. You need to read it again and again, and you’ll probably discover something new each time. Again I recommend this one to slightly mature readers (by mature readers I just mean children who are readers, this is not the kind of book you’d want to give to a first-time reader.)

Everyone thinks that Sophie is an orphan. True, there were no other recorded female survivors from the shipwreck which left baby Sophie floating in the English Channel in a cello case, but Sophie remembers seeing her mother wave for help. Her guardian tells her it is almost impossible that her mother is still alive, but that means still possible. You should never ignore a possible. So when the Welfare Agency writes to her guardian threatening to send Sophie to an orphanage, she takes matters into her own hands and flees to Paris to look for her mother, starting with the only clue she has – the address of the cello maker. Evading the French authorities, she meets Matteo and his network of rooftoppers – urchins who live in the sky. Together they scour the city for Sophie’s mother before she is caught and sent back to London, and most importantly before she loses hope.

Bookistaan says: The Rooftoppers is just the right amounts of whimsical, absurd, quirky and clever. The writing in the books is so lyrical, it’s the first thing I fell in love with. Next came the characters, so determined, kind, lovable, the are difficult not to grow fond of. Sophie’s quest for her mother is full of ups and downs and a lot of fear, but she’s such a brave and admirably stubborn character that the journey is full of wonder.

I loved the idea of ‘rooftoppers,’ these children hiding on Parisian rooftops and it’s portrayal and setting is absolutely charming and unique. So are the streets of Paris with the French pastry-shops, parks, bridges, music add beautifully to the atmosphere of the story. The ending is super satisfying and lives up to the build-up of the story, in fact, the ending and writing and my most favorite parts about the story. Actually so are the characters!

An Abundance of Katherines

On a road trip miles from home, this anagram-happy, washed-up child prodigy has ten thousand dollars in his pocket, a bloodthirsty feral hog on his trail, and an overweight, Judge Judy-loving best friend riding shotgun–but no Katherines. Colin is on a mission to prove The Theorem of Underlying Katherine Predictability, which he hopes will predict the future of any relationship, avenge Dumpees everywhere, and finally win him the girl.

Love, friendship, and a dead Austro-Hungarian archduke add up to surprising and heart-changing conclusions in this ingeniously layered comic novel about reinventing oneself.

Bookistaan says: I love John Green’s story ideas more than his plots, not that I hate the plots, they’re just very realistic and that can be disappointing in a book (for me), although it makes sense in hindsight. That said, what I love about his books are the quirky, snarky, oh-so-wise for their age characters trying to figure out life, and the friendships and relationships, and the profound observations about human character and life in general.

This book had all of the above. It has a great friendship between Colin and Hassan, their dialogue is so witty that you can’t get enough of it. Colin’s quirk is math and anagrams and he’s on a mission to find why all but one of his relationships fit a formula, the book is littered with fun footnotes. And Colin really wants to find his place in the world which I think is a sentiment a lot of us will relate to. Another thing I love about this book and most John Green books is that he makes geeks fun because a lot of times they are portrayed is not the most interesting light. In short, John Green’s books might not win your mind but they’ll win your heart, they’ll leave a piece of them in your heart but I do recommend him to slightly mature readers because he does talk about a lot of teenage angst and existential dilemma.

“Lina is spending the summer in Tuscany, but she isn’t in the mood for Italy’s famous sunshine and fairy-tale landscape. She’s only there because it was her mother’s dying wish that she get to know her father. But what kind of father isn’t around for sixteen years? All Lina wants to do is get back home.

But then she is given a journal that her mom had kept when she lived in Italy. Suddenly Lina’s uncovering a magical world of secret romances, art, and hidden bakeries. A world that inspires Lina, along with the ever-so-charming Ren, to follow in her mother’s footsteps and unearth a secret that has been kept for far too long. It’s a secret that will change everything she knew about her mother, her father—and even herself.

People come to Italy for love and gelato, someone tells her, but sometimes they discover much more.”

Bookistaan says: An adorable contemporary about finding yourself in an unknown city. It’s a light, charming, fun read, and the main character’s journey through Italy and finding new friends and opening herself to taking risks and learning to embrace change is inspiring.

The parallels are drawn between the past and the present, Lina’s mother’s story alongside hers, make the narrative that much deeper. The setting is dreamy and the narrative is done in the first person but works for this book because we get Lina’s inner turmoil while life is throwing these surprises at her and it’s relatable.

Bookistaan is a recommendations-based children’s bookstore that believes that a child’s imagination is a blank canvas that can and should be painted all sorts of colours and the best way to do it is through books. We bring the best of Children’s literature from India and abroad, offering diverse, age-appropriate reads for your child’s every need.