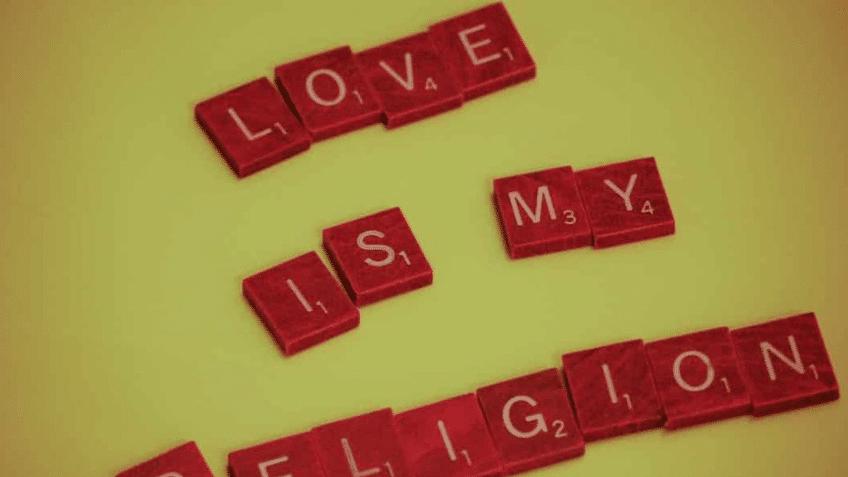 We got back from a short Christmas vacation and I connected to the Internet after five days to realise it is the time of the year when everyone on social media is bidding adieu to the present year and anticipating a great new year ahead. Amidst the various new year resolutions I also stumbled upon a few regrets and negative moments experienced by some in the year that was. It was indeed a sad year for those who lost their loved ones in natural calamities, terrorist activities, accidents and hideous crimes. All this got me thinking about my 2014. For me the year was full of learnings. The year 2014 will be etched deeply in my heart for I found my story this year. I relearned and rediscovered things about myself, I received tremendous selfless love from so many and most importantly I found my religion.

As a child, I remember, my mother used to tell us to chant a religious mantra at bedtime and my grandmother, literally, forced us to mug up a devotional hymn. We were impressionable and didn’t question either of them. We did as told. As I grew up and moved out of home, I continued to chant the mantra and hymn before all crucial and trying moments – exams, interviews, results, promotions – I still do. It became such a natural part of me that most of the times I was unconsciously chanting away. It is around this time, I discovered a miracle God. One of my friends at work told me about his miracles and how his career graph had grown ever since he started visiting the miracle God’s temple every Friday. I began following his footsteps and soon found myself going to the temple every Friday, hoping for an escalated growth in my career too. My husband and I were staying in different towns then. He was in the film line, away on shoots for six months at a stretch, at times, and I was working for a corporate house in Delhi. At that point in my life I was confused, lonely and vulnerable. Visiting the temple on Fridays gave me something to look forward to. I began looking forward to Fridays and if sometimes I couldn’t go to the temple I began fearing punishment. At times, I even gave up evenings with friends since I had to keep up with my temple appointment. Soon it became an item on my to-do list – a kind of a formality. I still remember how worried I was once when I couldn’t make it one Friday. I almost thought I’ll get a demotion or get sacked for skipping my appointment with God. Nothing like that happened, of course.

When I moved to Kanpur after my son was born, I was on house arrest for nearly a year. New place, no friends, nowhere to go. My life was all about feeding, cleaning and rocking the baby. Most of the time I had no clue what day of the week it was. Every once in a while, when I did realise it was a Friday, I said a quick prayer to God. I soon stopped visiting temples completely for I had no time. It is then that I also reflected on how tense I was about my temple visits and mantra and hymn chanting. No good really came out of them for they were being done with a motive. They definitely gave me peace but soon they became a compulsion.

Once I did start getting out of the house, whenever I saw a temple, I folded my hands and chanted the mantra and hymn and prayed for peace, happiness and good health for the baby. (After the baby arrives, prayers change and are directed naturally for the wellness of the baby.) As my mother and grandmother had, I too taught my son the mantra and hymn. We chanted every night at bed time. But I also included a new mantra along – ‘bless us, guide us, be with us and help us be good to all’. Soon this became my new mantra and quite as naturally my son’s.

When I reflect on all the times I was scared of some bad omen because I didn’t visit a temple, it amuses me. Why would God punish his children for not visiting him? It is very simple – be good to all and God will be good to you.

Coincidently I happened to watch the film PK recently and my belief in my new mantra just got stronger. God doesn’t need our protection – he can take care of himself. God doesn’t send anyone down with stamps – we have created them ourselves. God will never punish or demand anything from his children – except humanity and love for all.

I hardly ever visit any temple now but that doesn’t make me an atheist. I do remember to do my share of goodness. Having said that, I never oppose anyone visiting a temple, learning or teaching religious mantras to their children, pursuing religious practices. I visited a well known religious temple with my family in 2013 and it was indeed blissful and peaceful. I will continue to visit these houses of God whenever I get an opportunity and soak in all the positive vibrations from them. Though I will never ever become superstitious about not being able to make a visit. My new religion tells me to teach my child another important quality along with all our sanskars – Love.

I want to begin the year 2015 in the hope that no one hates, hurts and harms anyone in the name of religion, men respect women and maintain their boundaries, and parents break out of a stereotypical mindset and not pass it on to their children (yes boys can cry and wear pink and be scared of the dark and girls can like superheroes and cars and snakes.)