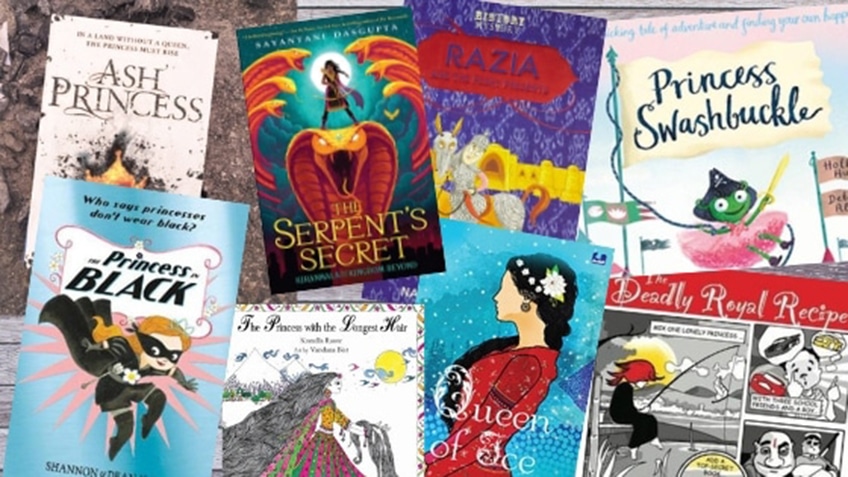 Once upon a time Princesses wore pink, looked pretty and were rescued by princes. But not anymore. The princess of today is all about rebelling, taking charge, writing her own story, running her own world. Her happily-ever-after isn’t dependent on anyone but herself, nor must it follow convention.

Since the definition of the princess has changed and so has her role, it is imperative that her portrayal also changes in consonance with the time. So, today we have some pretty radical princess portrayals for you. These princesses are pirates, ninjas, do-gooders, princesses who defy predefined gender roles to claim their own destinies. These are princesses who are exemplary in their independence and choices and they intend to inspire a lot of real-life princesses.

The Princess with the Longest Hair

This is the fascinating story of a princess who has the longest and the most beautiful hair in the whole kingdom.

Bookistan says: This is no Rapunzel tale. Even though our princess has long, lush hair, she’s no damsel in distress waiting for a rescue. Princess Parineeta is loved by all her Kingdom, she’s the pride of her land but she’s not one to enjoy being worshipped just for her status. She wants to live up to her status, make a difference. Her’s is an inspiring story of kindness, passion and discovering yourself.

The illustrations are so intricately detailed and colorful, it really adds to the feel of the book.

Her royal mum and dad want Princess Swashbuckle to marry a prince, but they never turn into frogs when she kisses them … So instead she stows away on a pirate ship. When she is captain, she and her motley crew find a way to help creatures everywhere they go. And soon they amass a treasure hoard, from thank-you gifts.

A story about following your dreams, Princess Swashbuckle also shows that kindness reaps its own reward!

Bookistaan says: Most princesses want to marry and become queens, Princess Swashbuckle wants to be a Pirate Queen, most Princesses want to rule their Kingdom, Princess Swashbuckle wants to rule the waves. She’s not afraid to follow her dream and doing what she feels is right. She’s “on a mission to find NICE things to do” and emphasis the importance of kindness and thoughtfulness.

The story is told in rhyme which makes it a fun song that you can recite again and again (might even get stuck in your head if you read it many times) and it has quite a few funny moments. The illustrations are absolutely vibrant and help add layers to the story like the motley crew of the pirate ship (including a whale who doubles as a speed boat), making it a clever, enjoyable read.

Razia and the Pesky Presents

Razia Sultan, the dynamic ruler of Dihli, is enraged. Someone is sending her pesky presents–girly dresses and soppy poems on sultanas. What’s worse, they come with notes challenging her right to rule, as a woman. Who can help the sultan solve this mystery?

Bookistaan says: I LOVE this series! I think it’s genius. It gives the reader a little taste of history, a little taste of the royal life without sounding like a lesson. In fact, let me warn you the book is not factual but I think that’s my favorite part about it.

Coming back to this story, did I also mention I LOVE Natasha Sharma’s wit and writing style! Her writing will make you laugh out loud on more than one occasion. She successfully manages to create a bold, admirable Queen, the kind of historical character I would like to remember.

Princess Magnolia is having hot chocolate and scones with Duchess Wigtower when . . . Brring! Brring! The monster alarm! A big blue monster is threatening the goats! Stopping monsters is no job for dainty Princess Magnolia. But luckily Princess Magnolia has a secret —she’s also the Princess in Black, and stopping monsters is the perfect job for her! Can the princess sneak away, transform into her alter ego, and defeat the monster before the nosy duchess discovers her secret? From award-winning writing team of Shannon and Dean Hale and illustrator LeUyen Pham, here is the first in a humorous and action-packed chapter book series for young readers who like their princesses not only prim and perfect but also dressed in black.

Bookistaan says: A delightful beginner chapter book about a ninja Princess who has a double identity, she’s secretly a superhero. I love that this book tells little girls that you can be girly and like clothes and still save the world and fight the bad guy. You don’t have to pick one. I think it’s a great message. Of course, the story and the adorable illustrations make it a un-put-downable read. It’s a series to watch out for!

(Only she doesn’t know it yet.)

On the morning of her twelfth birthday, Kiranmala is just a regular sixth grader living in Parsippany, New Jersey . . . until her parents mysteriously vanish and a drooling rakkhosh demon slams through her kitchen, determined to eat her alive. Turns out there might be some truth to her parents’ fantastical stories-like how Kiranmala is a real Indian princess and how she comes from a secret place not of this world.

To complicate matters, two crush-worthy princes ring her doorbell, insisting they’ve come to rescue her. Suddenly, Kiran is swept into another dimension full of magic, winged horses, moving maps, and annoying, talking birds. There she must solve riddles and battle demons all while avoiding the Serpent King of the underworld and the Rakkhoshi Queen in order to find her parents and basically save New Jersey, her entire world, and everything beyond it . . .

Bookistaan says: The setting of the book is majorly inspired from folktales from West Bengal and that’s probably my favorite part. My second favorite part is Kiranmala, she’s a character who’s both admirable and relatable. She’s courageous but with bouts of self-doubt and her journey is one of self-discovery and acceptance.

The story is very eventful, the protagonist almost flits from one task to another with lots of daring, humor and conviction. The melding of fiction with folklore helps in instilling a sense of identity, the writer does a good job of making the protagonist conscious of her roots and embracing where she comes from.

The Deadly Royal Recipe: Mix one lonely princess with a bunch of school friends and a little boy; add a top-secret Recipe Masterbook, lots of exotic food, a villainous raja and his even more villainous son; garnish it with action, adventure, car-chases and elephant rides; cook it all to perfection with a fast-paced plot … what you get is a wacky, racy adventure, which will have you burping in satisfaction!

Bookistaan says: Zafira is a lonely Princess who for the first time is making friends when she and her friends are kidnapped but she’s not one to cower down. She’s dynamic and resourceful in the face of the plight and loyal to the bone. Also, I loved this royal family in all their culinary obsession, somehow I felt at home with them.

As for Ranjit Lal’s writing, he’s of my favorite Indian authors and his plots are just the right amount of unreal. He makes you fall in love with his characters and the naturalist in him brings alive nature in this book. He takes you to the forest and you can almost feel it’s a breeze and its denizens.

Despised by her father and bullied by his heir, Didda’s childhood is miserable and her future, bleak.

When she is married off to the dissolute ruler of Kashmira, she must learn to hold her own in a court ridden with factions and conspiracies. But Didda is no ordinary queen. Ruthless and ambitious, she wants to rewrite history. Will she succeed?

Bookistaan says: Queen Didda is different not just because of her deformity but for her ambition, for her refusal to be undermined and for her belief that she’s made for greater things. It is this ambition that makes her defy conventions, that makes her a leader instead of a supporter. The story of her pursuit of power is one of unbound strength and undeterred conviction, it is these qualities that make her a memorable and inspiring character.

I like that the book challenges the way we see women’s contribution to Indian history. Here’s a Queen who ruled for almost 5 decades (first as regent and then as sole sovereign) and her rule is considered the most powerful and prosperous era for Kashmir ( much better time than her husband’s). A character who got lost in the pages of history, that celebrates the power and achievement of men, has finally found a voice. This historical fiction is a slow read, the kind to be savored slowly but it’s an important one.

Theodosia was six when her country was invaded and her mother, the Fire Queen, was murdered before her eyes. On that day, the Kaiser took Theodosia’s family, her land, and her name. Theo was crowned Ash Princess–a title of shame to bear in her new life as a prisoner.

For ten years Theo has been a captive in her own palace. She’s endured the relentless abuse and ridicule of the Kaiser and his court. She is powerless, surviving in her new world only by burying the girl she was deep inside.

Then, one night, the Kaiser forces her to do the unthinkable. With blood on her hands and all hope of reclaiming her throne lost, she realizes that surviving is no longer enough. But she does have a weapon: her mind is sharper than any sword. And power isn’t always won on the battlefield.

For ten years, the Ash Princess has seen her land pillaged and her people enslaved. That all ends here.

Bookistaan says: A dark fantasy about a princess who’s held captive for a long time before she can summon the courage to break free. It takes a while for this princess to realize the difference living and being alive but once she’s there, there’s no looking back, after the transformation the story is quite an action-packed and will keep out at the edge of your seats.

An entertaining page-turner that gives you rich characters going through conflicts that feel real. I like that it delves into politics and goes into the complexities of a conquered nation and where that leaves the people. The world building is quite satisfying and the plot progresses into surprising twists. Overall, a fast-paced read but I do recommend it for mature teens because it is a dark world (almost a dystopia).

Bookistaan is a recommendations-based children’s bookstore that believes that a child’s imagination is a black canvas that can and should be painted all sorts of colours and the best way to do it is through books. We bring the best of Children’s literature from India and abroad, offering diverse, age-appropriate reads for your child’s every need.