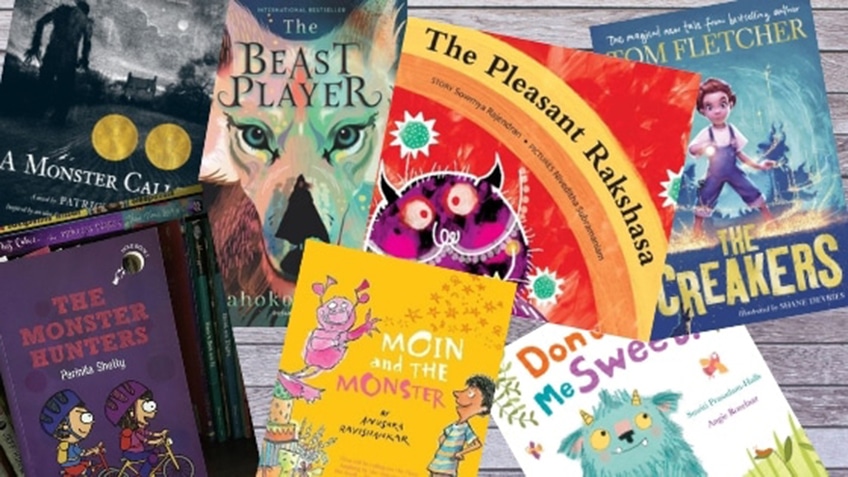 Hideous appearances, sharp claws, booming voices, just as unpleasant on the outside as on the inside, monsters were once far simpler beings. But monsters of today aren’t as rudimental and they definitely are not so easy to identify.

So what makes one a monster? Scary on the outside?

That’s the myth we’re busting today. Changing the definition of monsters, dispelling the significance of appearance from the equation, and focusing instead on intent.

Everyone thinks that little monsters are cute and cuddly, but this monster’s grumpy and grouchy. Honest! He does REAL monster stuff, like stomping around and eating squishy, squelchy food like bug eye stew. He’s brave, too – he’s not scared of ANYTHING. Not even big, hairy ogres . . .

Bookistaan says: An adorable story about a very ambitious monster who wants to live unto his character and be all things scary. This is such a funny book with lots of scope for enactment and role play. The illustrations are absolutely gorgeous, with soft, playful tones and so full of mischief, and the text flows in rhyme, making it a delightful read. It’s the perfect book for all the little monsters who are in a hurry to grow up!

Karimuga is a pleasant rakshasa. He is a beautiful rakshasa too. But that makes all other rakshasas jealous of him. Karimuga can’t bear to see them unhappy… A story that inverts ideas of beauty with a light touch, while the pictures add to the fun.

Bookistaan says: Karimuga is a monster like no other, he is a do-gooder! What makes him most happy is spreading smiles. I love the way the book challenges a lot of conventions, making you think about beauty and purpose and most of all it tells you that you have to look at the brighter picture to stay happy.

Moin and the Monster

“One night, in the dim darkness of his room, Moin heard something shuffling and sniffling under his bed?” It is a monster. Moin has to learn to live with the monster, which does nothing but eat bananas, sing silly songs and try out new hairstyles. However, keeping the monster a secret from his parents and teachers is a tough task and finally Moin decides that the only thing to do is send the monster back where it came from?

Bookistaan says: Monster in this book is delightfully silly and the protagonist is such a good friend, he goes to any length to accommodate his monsters antics. The winner of the show here is Anushka Ravishankar’s quirky writing, her hilariously bizarre situations and her non-sensical songs. Do not read this book lying at the edge of your bed, you will risk falling off. It’s that funny!

Abhay and Nitya are monster hunters. They know there are monsters in every child’s room, and they are going to find them!

Bookistaan says: An unpredictable early chapter book about two children on a mission to find monsters. Their hunt for a horror story turns into a comedy as things go wrong one after another. The story has a motley of character who are all full of funny opinions. It’ll make you laugh in a lot of places.

What silently waits in the shadows at night? What’s under your bed, keeping just out of sight?

Do you ever hear strange, creaking noises at night? Ever wonder what makes those noises? Lucy Dungston always did.

Until, one morning, Lucy discovers that all the grown-ups have disappeared – as if into thin air. Chaos descends as the children in Lucy’s town run riot. It’s mayhem. It’s madness. To most kids, it’s amazing!

But Lucy wants to find out the truth. Lucy lost her dad not long ago, and she’s determined not to lose her mum too. She’s going to get her back – and nothing is going to stop her… except maybe the Creakers.

Bookistaan says: The Creakers is a wonderful take on the whole monsters under the bed myth. Tom Fletcher has created the most lovable yet disgusting (in a good way!) monsters in the creakers and their world is ingenious. The author’s wit is riotous and crazy but at the same time isn’t devoid of little messages about recycling and the importance of rules. Lucy is a courageous, smart and kind protagonist, and her adventure is a page-turner that’ll have you cringing one minute and laughing the next.

Conor has the same dream every night, ever since his mother first fell ill, ever since she started the treatments that don’t quite seem to be working. But tonight is different. Tonight, when he wakes, there’s a visitor at his window. It’s ancient, elemental, a force of nature. And it wants the most dangerous thing of all from Conor. It wants the truth.

Patrick Ness takes the final idea of the late, award-winning writer Siobhan Dowd and weaves an extraordinary and heartbreaking tale of mischief, healing and above all, the courage it takes to survive.

Bookistaan says: I’ll say it again, this book is different from my usual recommendations. It’s not funny but it is about growing up and it is incredibly heart-touching. It’s about loss and grief and I will be honest, this book broke my heart. Patrick Ness has done a beautiful job bringing alive Conor’s feelings, feelings of anger, of helplessness, of loneliness. A harrowing tale about coming to terms with loss, learning to survive when the last sliver of hope runs out and growing up to embrace the truth.

Elin’s family has an important responsibility: caring for the fearsome water serpents that form the core of their kingdom’s army. So when some of the beasts mysteriously die, Elin’s mother is sentenced to death as punishment. With her last breath, she manages to send her daughter to safety.

Alone, far from home, Elin soon discovers that she can talk to both the terrifying water serpents and the majestic flying beasts that guard her queen. This skill gives her great powers, but it also involves her in deadly plots that could cost her life. Can she save herself and prevent her beloved beasts from being used as tools of war? Or is there no way of escaping the terrible battles to come?

Bookistaan says: A Japanese fantasy translated in English, this YA makes for an immersive, culturally alive read. Elin is a compassionate, kind protagonist who must choose between responsibility and that what she feels is right, and her world is authentic and rich in detail.

The fantastical, imaginative beasts of this book are sure to evoke fondness in all readers and make them think about the human tyranny over the natural world.

Bookistaan is a recommendations-based children’s bookstore that believes that a child’s imagination is a blank canvas that can and should be painted all sorts of colours and the best way to do it is through books. We bring the best of Children’s literature from India and abroad, offering diverse, age-appropriate reads for your child’s every need.