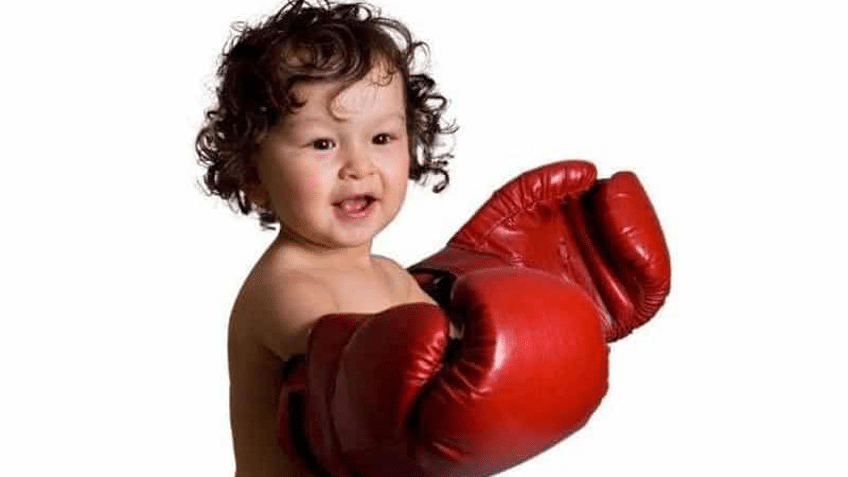 Just the other day I was called aside by my two and a half year old’s play group teacher and as I straightened up for ‘the talk’ my mind raced with a zillion thoughts, mostly pleasant. Once she was done dealing with all the other parents, I walked up to her for ‘the talk’.

“This is not a complaint.”, she began.

“Umm”, I though to myself. “This doesn’t sound pleasant.”

I straightened up a bit and looked intently at her for the rest of ‘the talk ‘ to unleash.

“Viraaj has really started hitting and pushing”, she continued

“What?”, I looked at Viraaj, currently fidgeting with his sipper. “My little Angel. Hitting…pushing…no no no…of course you’ve got it all mixed up, you are talking about another bully kid.”, I thought in my head but tried to maintain my composure and waited for her to continue.

“And this has been happening since a few days now. I thought you should talk to him about it before it gets worse. Today he pushed a boy off the tricycle because he wanted to ride it first.”, she said.

By now I could feel my face burning. I was upset, of course, but I was angry at myself for I knew why this was happening.

Well to give a little background, Viraaj was slapped by another child about a month or so ago and that was the first time he was exposed to ‘hitting’. We haven’t still exposed him to television, and he hasn’t been to the movies with us yet. So hitting and getting hit , which children usually get introduced to by way of TV, were scenarios that did not exist in his world.

So when he got slapped on the face by a peer he was awfully upset. Not only did he cry, he threw up and even came down with a mild fever. Naturally as parents, we were terribly upset. We were concerned that he was going to start school soon and how was he going to deal with getting hit and pushed around? Our sensitive and gentle baby needed some preparation to face the ‘Big Bad World’.

And so we made our first mistake of parenting.

I consoled him and gave him a lesson that I will regret forever. “If anyone hits you, hit back!”

I was angry, yes, and I wanted him to be stronger. Little did I know, that by way of my talk on self defence, I had given him the license to hit others.

And then when I was called for ‘the talk’ by his teacher I knew exactly where this behaviour was coming from. After all I had sown the seeds myself.

Back in the car, I asked him as to why he hit and as expected he replied, “I wanted to ride first. And you told me it was okay to hit.”

Children will filter information to suit their convenience but it was time for me to introspect. I could not undo the lesson that had already been given but the situation certainly needed damage control.

Some told me it was normal for kids this age to hit and push while others even had to the cheek to say, “He’s a boy and of course he will hit”. So I was faced with umpteen solutions and I wasn’t ready accept this behaviour as a normal part of toddlerhood or boyhood. Well the latter, most definitely not!

So I decided to talk to him. I began with telling him that “Mumma was wrong when she said it was okay to hit.” It wasn’t working. And his hitting circle was fast expanding to now include house help and other children he was interacting with, out of school. Not only was he pushing and hitting to have his way, he was becoming intolerant to everyone and even screaming and shouting.

So I had to take the difficult route – the route of punishment. I designated a corner in the house as ‘the naughty corner’ and whenever he hit someone, he was made to stand there until he apologised for his behaviour. For starters, it was very difficult to make him stay put in the corner. He wasn’t used to mom being angry at him, he threw a crying fit, rolled on the floor, ran away from the corner and screamed and shouted for attention. Everyone in the house was instructed to ignore. Yes it was heartbreaking but believe me, it worked.

A word of caution: you will be tempted to take your sobbing offspring in your arms and everyone will call you a heartless monster but stay strong, it is for the good of your child. Also remember NEVER hit your child as punishment, because by doing so you are yourself giving him/her the license to hit.

Do not let your frustration or heartbreak show on your face. Just stay calm and carry on with your business without giving your child a reaction.

After he apologised, I hugged him and consoled him and told him that it was not okay to hit and that hitting hurts.

I repeated (and still do) this mantra “It is not okay to hit and hitting hurts” many times a day.

I also started taking away things he liked when he behaved badly. That too worked, at times.

On days he had behaved badly during the day, apart from punishment, at bedtime when everything was over, I told him in a gentle tone that whenever he hit or pushed anyone my heart broke and that it hurt me the most.

(Now sometimes when he hits, he comes and checks if my heart is breaking. I have to hold a straight face and confirm his fears. He usually apologises at once.)

Yes his hitting and pushing bouts have reduced tremendously. And believe me, it is because I took action immediately and did not let it pass as a phase.

Another important thing that has come out of it is that Viraaj knows that it is wrong to hit. He hasn’t transformed into a non violent child, just as yet, but he feels guilty when he hits someone and tell me that he did it. I think we have made a start and I am hopeful it will cease to happen completely soon.

Another layer to this behaviour is the unwillingness to share. And sharing is a quality that doesn’t come naturally to children until they turn four. But they do need to learn how to coexist peacefully with other children, and for that to happen parents have to set an example and again talk to them about it. Tell them that “Sharing is caring.”

Reward them for good behaviour and punish them, mildly, for bad behaviour. When I say punish I do not mean hit or scold harshly but in your own way convey to them that what they did was not acceptable. Be assertive but not rude.

“It is not okay to hit – Hitting hurts”

Repeat these mantras as often as possible. Sooner than later they will come around.

It seems only logical to make our children strong enough to fend for themselves outside the safe confines of our homes. And hitting back seems like a reasonable solution. But this solution will almost always backfire and the children might also use it as a weapon on their parents when they  don’t have their way. Best it to tell them that if anyone hits them, they must stop them by saying, “No”, and if it still doesn’t stop they should tell an adult (parent or teacher) about it.

Believe me:  This will not make them tattlers or sissies.

After all ‘An eye for an eye will make the whole world blind’. This seems to make a whole lot of sense to me now.

A few pointers on what has worked for me:

3 thoughts on “How to Deal with Hitting Behaviour in Toddlers?”