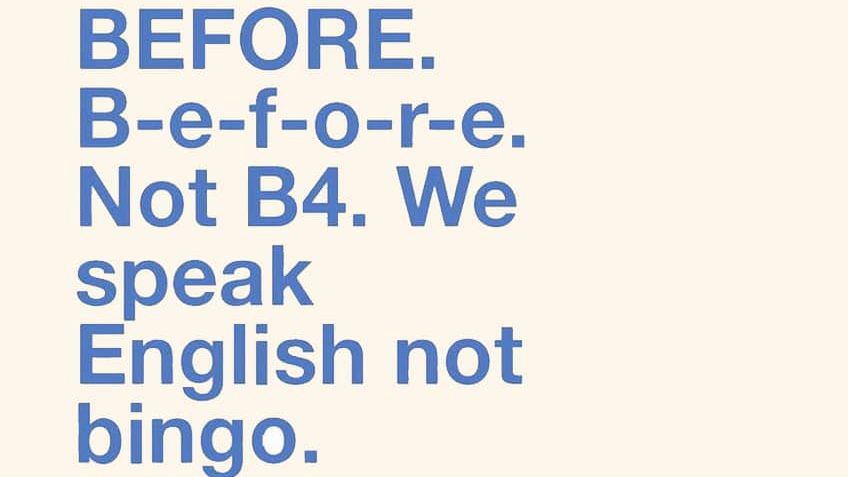 Punctuations: I am retiring. Period.

Grammar: Are you, now? And, pray, what am I supposed to do? I feel dejected.

Spellings: You cannot comprehend the anguish of being stripped off your beauty and be turned into something barely recognisable.

Creativity: Whine all you want. No one is listening. Pay heed, my friends, to the era of trolls and memes and all the out-of-context trash waiting to vex and pain your senses.

The immensely dramatic beginning of this post may be attributed to a horrendous experience in the recent past. I confronted the one thing I dread the most- the deterioration of a language. Not a long time ago, I got an opportunity to be a part of the esteemed panel of judges for an inter-school story writing competition. Being the youngest among the lot, I admit I was jittery, self-questioning in a way. “Could I do this?” I asked myself, “Was I able enough?” After having put myself at ease, I ventured to take up the task at hand, almost with as much vigour as I would have if I was one of the participants. I will not deny the fact that I was beyond excited for there is nothing better than spending your lunch time reading stories. Also, I have always believed that there is something about children telling stories. Their power of imagination is still strong and freestanding or so I thought.

Upon entering the library where we were supposed to be reading the entries and awarding marks, a section of books caught my attention and before I could check myself, I was drawn – the classics, of course. This led to an intense discussion on the importance of classics and an essay by Italo Calvino, Why Read Classics?, popped up.

We, finally, sat down to assess and delve deep down only to discover that we were in for a horrid ride. This was a discovery, an atrocious one. As I skimmed through the entries I encountered the lamentable state of grammar, syntax, punctuations and spellings. As for creativity, the plagiarism is blatant. One entry after another accentuated the dreadful state of the language I hold so dear. During the storytelling workshops, we always mention that as a writer or a storyteller we are at a liberty to take inspiration. However, it is a matter of grave concern where one derives their inspiration from. Not only was the content internet regurgitated, the style of writing was heavily influenced by what is commonly known as the sms language.

Falling back to what has caused this depredation in the first place. Long after I left for home and several days later, this experience did not let me be at peace. I have since racked my brain and sought counsel from teachers, principals, friends and storytellers alike. I wouldn’t go as far as to declare it as the concluding but would definitely call it as one of the most likely reasons- the degrading quality of teaching. I do not intend to criticise but merely bring to light what is being universally felt. Having been taught by some of the best teachers, I cannot look upon the ones today as the best in the profession. Teaching is an art. It pains me when I hear somebody saying that they would teach if they don’t find anything else to do. Even more so, when it is done as a time pass. I do not believe in “Those who can’t do – teach.” There is much to do when and while you teach.

The framing of simple sentences and correctly spelled words, I believe, is the most basic thing that one can expect and it is unsettling when the same seems unachievable. This only goes to reaffirm the importance of incorporating Phonics in our curriculum. Not only does this method of teaching emphasise identification of the smallest unit of sounds, it henceforth strengthens the comprehension power of an individual.

Therefore, it only makes sense that we adopt this method of teaching. At NutSpace, we have been running the Phonics programme which helps enhance reading and writing abilities in children right from the start.
I cannot end this without reinstating the importance of reading. This is again something that lies at the core of our curriculum at NutSpace. We have been doing our bit in the form of workshops that concentrate solely on refining the reading, writing and even listening abilities among individuals. It is important to direct our efforts collectively towards the same.