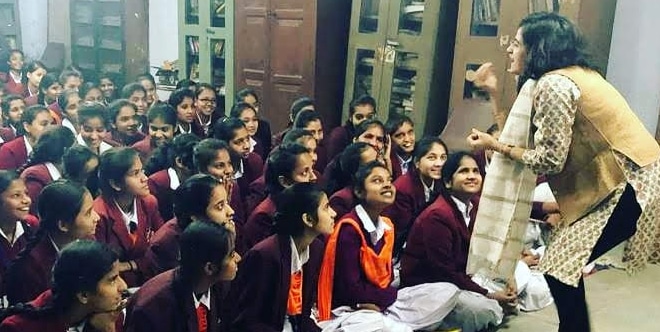 In the book Leaving Time by Jodi Picoult, I was reading recently, I came across this line, ‘Memory is linked to strong emotion, and those negative moments are like scribbling with permanent markers on the wall of the brain.’ Intriguing though the book was when I read these words I stopped reading for a bit and began to mull over the truth in these words.

For me, my school days were mostly horrid. My first memory of school is when I was 3-years-old. My mother had enrolled me in a neighbourhood kindergarten. A young woman, not more than 25, was our class teacher. I had a brown Milton bottle that leaked. She pointed it out to me a couple of times but you know, as a 3-year-old, I didn’t really take the necessary steps to fix the problem and kept bringing it back to school. One day she got so mad she used a brown ruler to smack me on my hands. I still remember my ears burning, cheeks flushed and tears welling into my eyes, I also felt the piercing glare of my classmates. Back then I didn’t know but it was ‘humiliation’ that I was experiencing.

I then joined another kindergarten school. There were only eight of us in that group. I always struggled with mathematics. Numbers scared me. I was struggling with reverse counting and kept repeating a mistake. Exasperated, my teacher taunted, ‘It is so simple, why can’t you get it? Have you got bhoosa (straw) in your head?’ The same burning sensation in my ears and cheeks returned. I was teased in the playroom, this was nearly 35 years ago but I can still hear the voices of my classmates, ‘What’s in Rohini’s head? Bhoosa, bhoosa, bhoosa.’

Recently as I was watching episode 6 of Sex Education (season 3), the horrible memories of public shaming gave me a restless night. Hope, the headteacher, humiliates three students Adam, Cal, and Lily during a school assembly. They are called on stage and shame tags are put around their necks. The way she makes them feel guilty for doing something that was a part of them is exactly what was done to me when I was in middle school.  Watching that episode made me feel like a mess all over again.

When I was in class 7, a teacher found out that I was making fun of her. I had given her a name and even composed a silly song about her. She made life hell for me. She would make me stand in front of the entire class and say, ‘So you think you are smart? I’ll show you.’ I was 13-years-old, what do you expect a recent teenager to do? I cried. I didn’t really know what to make of her threats. My only escape was an inter-school elocution competition our school was hosting. I would practice for hours and whenever I got a chance to miss her classes, I did without batting an eyelid.

It was the day of the competition. Everything was ready, my name was printed on the leaflet, I was to go next. The usual butterflies before the performance fluttered, I got up, paced for a bit, and then queued up with the other performers. I was to go on stage next, my name was announced, or wasn’t it? What? There had to be a mistake. Someone else’s name was announced. How could this be happening? But, it was my name on the leaflet, wasn’t it? I was certain it was a mistake so I waited for my name to be announced until the queue of performers ended. I vividly remember running into the empty school alleys as fast as my feet could carry me. My head was pounding, my eyes were stinging, and there was a pain – I couldn’t understand where but I think it was in my stomach as if someone had kicked me really hard. I crouched in the empty alley, holding my stomach, sobbing softly.

Later, in class when I had come to terms with the fact that I hadn’t been allowed to perform because of making fun of a teacher, I felt guilty about doing it. Sadly, I felt like the culprit. I sat down quietly in the class without making eye contact with anyone, showing signs of being ashamed. Blaming myself for doing something as terrible as making fun of a teacher, giving her a nickname. ‘Serves you right,’ I quietly said to myself.

Just then the teacher in question walked in. I avoided eye contact, slunk really deep into my chair thinking she wouldn’t notice me and then I felt it, her piercing glare. I looked up. She was sniggering. It was like a little victory for her. A sadistic and wicked lesson. Suddenly I wasn’t guilty anymore. This was wrong. Even though I was much younger than her, I knew it was unfair to punish someone to this extent. I couldn’t say anything to her. I just remember how the day trudged by and later in the evening, I sobbed inconsolably in my mother’s arms.

That day something changed. I wasn’t quite sure what it was then but now I know, somewhere deep in my subconscious, I decided to be a teacher. I also decided to speak up.

Referring to the show Sex Education again, during the public shaming when Rahim, a student, protests saying that school is supposed to be a safe space and not a place for fear, he gets suspended. Back in school, I would never have dared to do this, today too I struggle with people in authority. I suppose, it’s a life-long process but I am getting there. Anyway, my subconscious decision of becoming a teacher came to fruition much later of course, when after several experiments my consciousness met my subconscious eventually.

There weren’t bitter experiences always. There is one teacher who had a deep influence on me. She was our geography teacher, an ex-IFS officer. To think of it, we were extremely fortunate to have a teacher like her. I hadn’t realised that though, until much later. Until I had a ‘talk’ with her in the matchbox-sized geography room in our school. But that took some time. By the time I reached grade 10, I was conditioned to be a great rote learner. Zone out during class lessons, study only for the exams, you know what I mean.

Pat, that’s what we called her, taught us differently. She shared stories of her travels. She made us do maps, tried to make the constricting education system a little more hands-on. Eventually, she succumbed to preparing us for the cruel examination system. She had to race through her syllabus in order for the exams, which meant fewer stories and even fewer hands-on activities. I lost interest. When the results were announced, I realised I had flunked the Geography exam by a mere one and a half marks! These were the ‘selection tests’. Yes, that’s what they called them to create anxiety among students. If you failed even a single subject during these exams, you would be forbidden from taking the final board examination. And yes, sadly, we believed them. I rushed to the Geography room begging her for a meeting, eventually, she relented.

‘Please ma’am, please give me grace marks. I don’t want to fail.’ I begged. ‘Grace marks?’ She chortled. ‘That’s a good one!’ She said in her unique Pat style. I wasn’t amused. ‘They won’t let me take my boards. It’s only one and a half marks. Please ma’am, please.’ ‘Sit down, Rohini.’ She pulled a chair for me. I sat down hoping she will give me the marks and I’ll be done. How naive I was!

‘When I was in the services, I met with an accident.’ She lifted her saree, a little, to show me that one of her shoes had an extra heel. ‘One of my legs is shorter than the other.’ We knew that of course. We had noticed her limp and even seen the extra heel in her shoe. But, what did that have to do with my grace marks, I thought impatiently. ‘I had to leave the services because of my health. What I loved the most, just like that, one day. Nobody gave me any grace marks, Rohini. Not even one and a half marks.’ I looked up at her, ashamed. She was smiling. At that moment I learned an important lesson, these exams that everyone makes so much fuss about were nothing but measures of how good a crammer one is until one takes them with passion and to learn and not with the end goal of marks. I also gathered, life will flunk us several times, sometimes just by one and a half marks but that doesn’t mean it won’t give us another chance. ‘You still have your board examination to prepare for. I am happy to help you understand the subject well.’ There was silence in the room. I got up, thanked her, and left. I scored 80% in my board examinations. It wasn’t that great a score but I knew whatever I wrote in those papers, I knew it well, I understood it and I could apply it. It didn’t matter that my neighbour’s daughter scored 90% and their neighbour’s son got a 95%. I celebrated my 80% because I knew it mattered.

I really wanted to meet Pat. I really wanted to tell her how grateful I was to her for giving me such a valuable life lesson that day in the Geography room but I couldn’t. I didn’t know what to say back then. Today, I thank her for giving me such a valuable lesson on failure. Another tiny experience got added to my subconscious mind and today when I plan lessons, I see a lot of Pat in them.

So what kind of a teacher am I? I guess the one who loves telling stories, who wants to raise kind humans, and who knows that children linger on to every word, kind or unkind, spoken to them.

7 thoughts on “The Importance of a Teacher: A True Story”