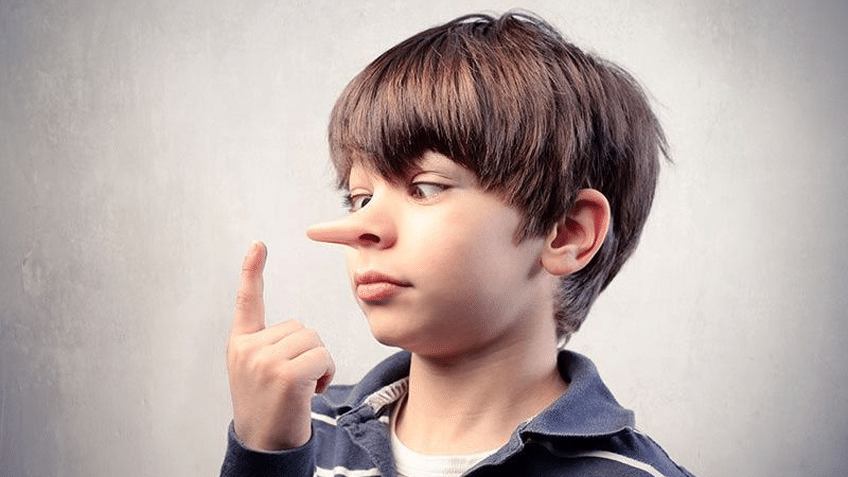 The other day I was sitting in my studio and working on something when Viraaj came and asked me for a candy. I discourage anything sweet after six in the evening, so obviously I said no. And then I heard a toffee wrapper opening in the next room. At first I ignored the sound, but then I couldn’t for long because it was soon followed by quick munching and chewing sounds. I stopped my work at once and got up with a start. No it couldn’t be. Of course Viraaj can’t defy my orders. Part of me wanted to just ignore the sound and go back to work but I tiptoed into the neighbouring room and caught my three-year-old enjoying the wonders of sugar.

“Viraaj didn’t I tell you not to eat candy?”, I said assertively

“But he told me that you allowed him”, said my horrified maid

“What? Are you sure?”, I asked, now with the anger line on my forehead visibly creased.

“Was Viraaj turning into a liar?” I thought

>I controlled myself from reacting any further and, with thoughts of this newfound fear clouding my mind, went back to my work station and began working.

We went home and I completely forgot about the little incident. The next day when I went to pick up Viraaj from school, his teacher asked me to stay back for ‘a little talk’. “Oh no not again”, I thought and swallowed hard. “What has he done now?”

She asked Viraaj to go to the swings and in a hushed tone asked me, “Viraaj mentioned something today. Did you husband hit him?”

It took me a minute to comprehend what she was asking me. “Excuse me?”, I said

“What. No way. What are you saying, he told you that?”, I couldn’t think straight

“We all lose our calm with toddlers. They can really test our patience, but hitting is a strict no-no.”, she said

“Of course I know. I mean we know that.”, I fumbled

I didn’t say anything else. I didn’t want to tell her that my son was lying. Like a defeated soldier I walked across to the swings, collected my son and drove back home.

By now I was scared. Worried. Was my three-year-old turning into a pathological liar? Two lies in two consecutive days. This was a matter of concern.

On our drive back home I asked him about what his teacher had told me. He said “Yes. Daddy hit me on my face last night.” And he even acted it out by slapping himself.

“Last night when I was sleeping.”, he said as he fidgeted with his water bottle

After we reached home the first moment I got alone, I called my husband to check. Of course he hadn’t. He and I first had a laugh, but I was unsettled.

I began thinking, why was he lying? One sleepless night and I concluded – his imagination was to blame. Yes toddlers have an active imagination and at times they cannot differ between reality and fantasy. When I discussed ‘lying’ with him he couldn’t comprehend fully as to what I was talking about. That’s when I realised it was unintentional.

Of course I told him how important it was to always ask me before eating something like candy and to my surprise, a few days later, he brought home a few candies from school. They were distributed in school after a classmates’ birthday. He shared them with me, asked me to unwrap his candy and ate after I approved. I like to believe we are past the lying phase.

(Though for the daddy slapping bit I am still bewildered and so is my husband.)

Just when this phase was over we moved to another challenge (it never really ends – does it?). He has now discovered the huge benefits of tears. Every time he wants something and doesn’t get it he breaks into a fit of crying. The loud whining is followed by a stream of tears and when he gets what the tears were being spent for the magic sprinkles vanish in a jiffy. I remember when Viraaj was born and he got his first vaccination, I cried. Well that was then; I am not moved by tears anymore.

Children are great actors and of course they have no malice in their hearts but they are fully capable of manipulation and scheming. With Viraaj, I have noticed, a distraction works. Pretty soon he will figure my trick out and, perhaps, decide not to relent. For now it works so I am holding on to it. Sometimes I am at my wits end with the tantrums so I just let him cry it out but I never shout at him. It takes a lot of patience to not shout. It’s not easy but not impossible.

What I am facing at the moment are the whims and fancies, terms and conditions, and mood swings of a threenager. Yes the term threenager fits so well in our current phase. He has an attitude, wants what he wants, is stubborn as a mule, bursts into tears at the drop of a hat…

Given our current circumstances, we decided to make a behaviour chart. A black star for bad behaviour and a gold star for good. Two black stars cancel a gold star. Five black stars mean no treats and outings on weekends and five gold stars win him a special treat, extra playtime and a surprise over the weekend. I wasn’t sure if he would be able to understand and comprehend fully the rules. After all he is just three. To my surprise he did and it has been working very well for us.

So what gets him a black star? I didn’t have to rack my brains for that one. In our case it was making a fuss, doing things that gave him a time out and whatever makes us say the word ‘No’ to him, not listening, shouting and screaming, not drinking milk, hitting.

And what wins him a gold star? Of course doing the opposite of the things in the black star list and additionally saying his magic words (please, sorry, thank you, excuse me), sleeping on time without making a fuss, not following me into the bathroom, showing responsibility etc.

It makes me very proud to share that it’s been three weeks and his gold stars have exceeded the black stars. In fact he knows what will get him a black star and on one or two occasions he has even come to me saying, “Mamma give me a black star, I was shouting.”>

As parents one is constantly ideating and finding solutions to deal with the new challenges of parenthood. While many parents worry that their child will be confused if too many rules are forced down their fragile minds, it is less likely than you might think. Kids quickly catch onto the idea that the rules at school differ from those at home or at friends and relatives’ homes. What’s critical is that the adults involved all agree on the big issues and that they all enforce their separate smaller rules consistently.

Another important note for us parents is to be wary of not labelling our little ones. Whether from pride or annoyance parents tend to inadvertently label their children, “You are a stubborn boy”, “Don’t turn into a liar”, “Stop being shy all the time”, “You are so pretty”. Positive or negative, labels can often limit a child’s sense of herself. Instead of saying “My son is very shy” in front of an outsider, try and put it like this, “My son warms up after he gets aquatinted” and instead of saying, “You are so handsome”, try saying, “That hat looks nice on you. The colour suits you.” Labels are something one takes all their lives to grow out of. I still remember how, as a child, I was at times called “submissive” at home and to keep up with my label a lot of times I found myself holding back in a situation where I wanted to speak out.

Yes it’s tough to deal with a three-year-old who is at the threshold of finding a unique identity for himself, who is progressing from an insecure toddler to an independent one, who is holding his pee or poo for he doesn’t want to miss even a second of playtime, yet this is also a wonderful phase because of his blooming vocabulary that is bubbling with new words and adjectives, and I sometimes get to hear lovely things like, “I love you so much mum”, “You look so beautiful in that dress”, “I missed you when you were gone” – and that makes it all worthwhile at the end of the day.

Researchers from Brock and the University of Toronto have learned children as young as two lie but that it’s nothing to worry about. According to the study lying at such a young age shows that they’re slightly ahead of the game in terms of their brain development.

The study states: “These findings help us understand the early development of verbal deception and demonstrate that children’s lie-telling can occur earlier than we thought when the necessary cognitive skills are in place.Parents shouldn’t be concerned about children’s early lies as it is a sign of cognitive development.