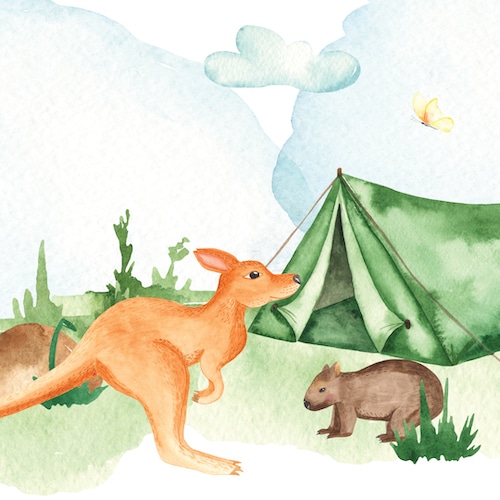 Listen to the Story: How the Kangaroo got its Tails & Wombat its Flat-head?

This is an aboriginal tale all the way from Australia. In this story, there is a wombat and a kangaroo that got along just fine but one fine day something happens and they begin plotting revenge on one another. What will happen when they finally execute their wicked plans?

Australian aboriginal myths or stories are also known as Dreamtime. They are performed by the aboriginals. These are symbolic of the accumulated wisdom of time immemorial which they also refer to as the Dreamtime.

Learn more about this a more about Australia on our learning platform.

Do you think it was selfish of the wombat to not let the kangaroo in?

Now let’s think about what the kangaroo did? Since the wombat treated him badly he got really angry and hurt him. Do you think that was the right thing to do?

Build life skills and more with our lesson plans created by experts.

Read Story: How the Kangaroo got its Tails & Wombat its Flat-head?

Far off in Dreamtime, Mirram, the kangaroo, and Warreen, the wombat, were men. Both of them lived in the vast jungles in Australia and both of them got along fine. You could call them friends. They spent their day hunting all day long.

At night, Warreen, the wombat, made a lovely gunyah for himself with soft bark and leaves while Mirram, the kangaroo, liked to sleep in the open. Mirram treated the lovely soft grass like his mattress and the beautiful clear blue sky as his quilt. He never bothered building himself a house. He thought he was just fine outside.

One day, the weather turned bad. They both looked up at the sky. The sky was cloudy, the wind was chilly. Warren ran and tugged himself in his gunyah. Mirram got worried. Mirram pacified himself, “If it rains I’m going to seek shelter with my friend. I’m sure the Wombat will let me in.” Mirram went and sat by a rock and closed his eyes. He felt a big drop of rain fall on his nose. It had started to pour. The sky rumbled loudly. Mirram, the kangaroo, was scared. He quickly ran towards the trees to seek shelter under them but it was pouring like cats and dogs. The trees failed to provide shelter to Mirram. Mirram looked at Warreen’s tent. The gunyah was waterproof. Warreen was fast asleep in it.

Mirram ran towards Warreen’s tent and called his friend, “Hello. Let me in Warreen. Hello Mr. Wombat. Please let me in. It’s extremely cold outside. It is raining.”

The wombat opened his eyes and grumpily looked at the kangaroo and said, “Oh! go away, will you? You careless kangaroo, don’t you have enough grey cells? Don’t you know, you need to have a roof over your head? It rains! Now let me sleep!” The wombat went back to bed.

Mirram turned around dejected. He sat by the rock, the rain continued to pour, and the chilly wind continued to blow. He tried to light himself a fire but everything was so wet. Mirram was cold, he looked again at Warreen’s gunyah. He thought, perhaps his friend will allow him in now. He went to try his luck again.

“Hi, Warreen. I know, I know I’ve been careless but please could you give me a little place in your tent, tonight. Tomorrow I am going to build myself a lovely home. I will not bother you again.“

“Oh, Mirram. You are so annoying. There is no place in my tent.” Miriam saw there was enough place in the tent. “But I’m not going to bother you. I will be in that corner over there. Believe me, I will not bother you. Please let me stay for one night.”

“No, no, no. just get out of my tent this very minute Mirram. I’ve had a very busy day and I don’t want to entertain any guests now.” Saying that the wombat pushed the kangaroo out of his tent.

Sitting in the rain, the kangaroo was cold but more than anything else he was angry. He hatched a wicked plan. He picked up an enormous rock and dragged himself huffing and puffing towards the wombat’s tent. He went straight in and smashed the rock on the wombat’s head. Wombat woke up with a start. The wombat did not die but the wombat’s head had become flat. The wombat cried out in pain, “Oh Mirram, you wicked Mirram. How could you hurt me? My goodness.”

“Warreen, I’ve hurt you because you are mean and selfish. I curse you that from now on you and your generations to come will have a flat-head.” Saying this, Mirram stormed out of the tent.

Warreen was angry. He wanted his revenge. Yes, he had been selfish but that didn’t give Mirram the right to hit him on his head with a rock. Warreen, in pain, plotted his revenge through the night.

The next morning he saw the kangaroo chasing a possum. The wombat picked up a spear and tip-toed right behind the kangaroo. Warreen pierced the spear through Mirram’s back.

“Huh! And this, my friend, is revenge. I curse you Mr Kangaroo, all your life you will walk with a spear in your back. You will wander all over Australia without a house. You will never be able to build a house for yourself.”

Since then the kangaroo has a big spear-like long tail and whenever he jumps, the tail thumps on the ground. Even today, kangaroos don’t build themselves a home. As far as wombats are concerned, well, they are still selfish and still flat-headed and you can find them in Australia.